Whistle While You Work.

STARS Employment First initiative has been working with a STARS member who was hired at a local hotel. This hotel was getting low grades on its inspections when cleaning rooms. They were cleaning the room just enough, but they started to see build up in some of the details. Grime in the floorboards, behind the toilets, sticky dressers, things of that nature.

We saw an opportunity for success…

Our member who has autism excels at detail work and doing things to completion.  Because they could not let a single crumb go unnoticed, they would take more time to clean each room, to a point where they were going beyond their shift. Which became a challenge for both the member and the hotel. But the hotel saw how the quality of the rooms that were cleaned by our member was much better than what their neurotypical peers were able to do.

The hotel had a need for detail work, and the STARS member excelled at the details. With a few discussions and meetings with the member and the manager, it was decided that this member would benefit the hotel by being their designated detail cleaner! Moving forward they will go into already cleaned rooms and focus on the details! So, from the smudge on the wall to the crumbs behind the dresser, nothing goes unnoticed or unattended. This is a great example of how a job can be carved to mutually benefit an employer and their new employee with special needs.

Part OF The U-Haul Team.

U-Haul has become an integral community partner with STARS. Their two towered headquarters in downtown Phoenix fondly known as the Central Towers and their multiple other corporate buildings provide a wonderful and supportive environment for our job seekers to work.

Marcia Chiariello, U-Haul Headquarters Operations Manager & Building Manager, has been amazing with Jackson S. She carved out a specific job as a part-time custodian to empty recycling bins and confidential shred bins in the two main U-Haul Central Towers.

She has been a great Manager and is always available when Jackson has questions. Marcia mentions how she has personally seen him grow in confidence and skills over the past few months. 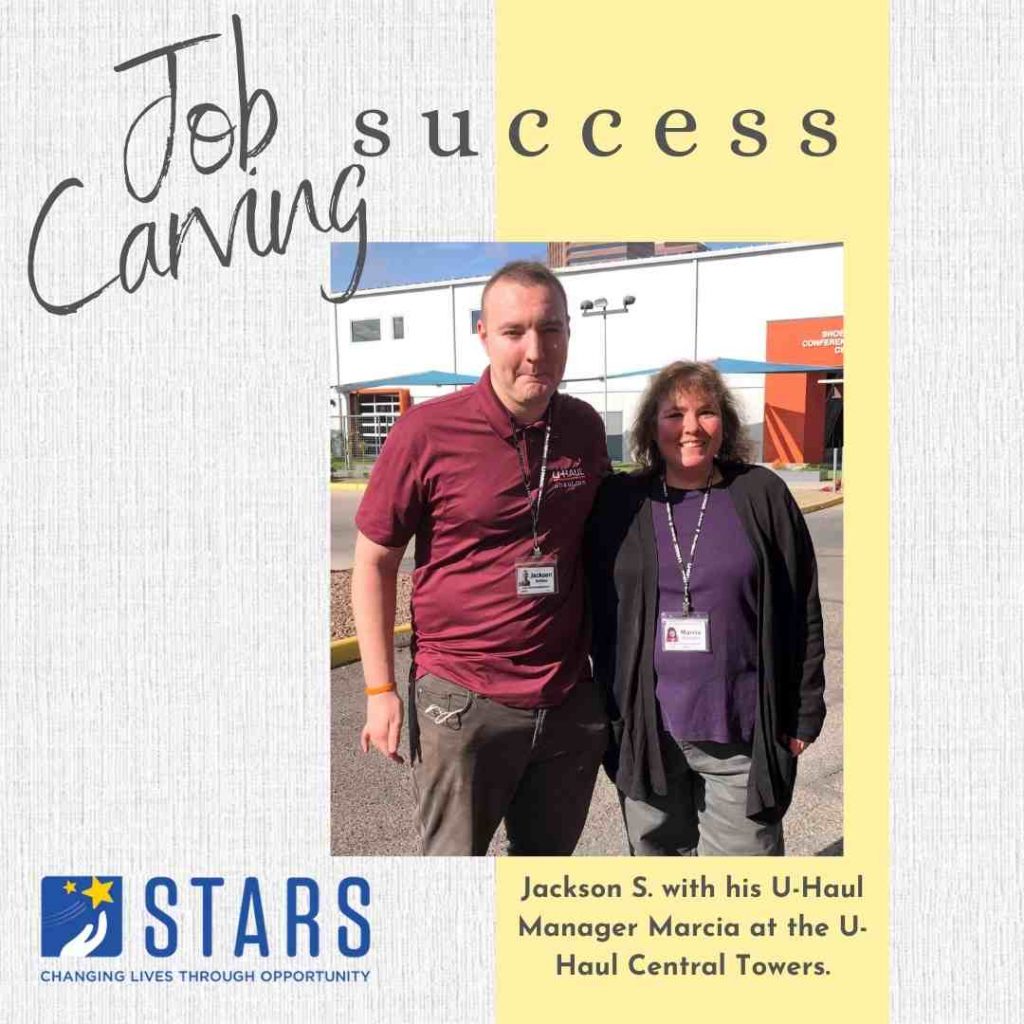 When Jackson first started, his tasks included emptying the recycling bins and some light cleaning.  Through Marcia’s understanding and coaching he was able to swap out the cleaning task for emptying the shred bins task, which he prefers doing.

Marcia, as well as U-Haul, has shown respect, courtesy, and professionalism in Jackson’s job progression. U-Haul has made Jackson a definite part of their team.

U-Haul recently carved out a position for another Employment First participant, David W.  When David left the interview, he stated that Marcia was “very nice” and he felt “peaceful”.

David started his position on January 16, 2022. He is responsible for sweeping the outside parking lots, picking up any debris on the ground, and emptying outside garbage cans before break. After break he collects recycling from certain offices and helps with shredding.

David was made to feel comfortable from the beginning with the patience and understanding that Marcia gives him. His confidence in learning new tasks has grown as he discovers he has the time and space to accomplish them. David is smiling daily and saying “hi” to co-workers and feeling a part of the U-Haul team. 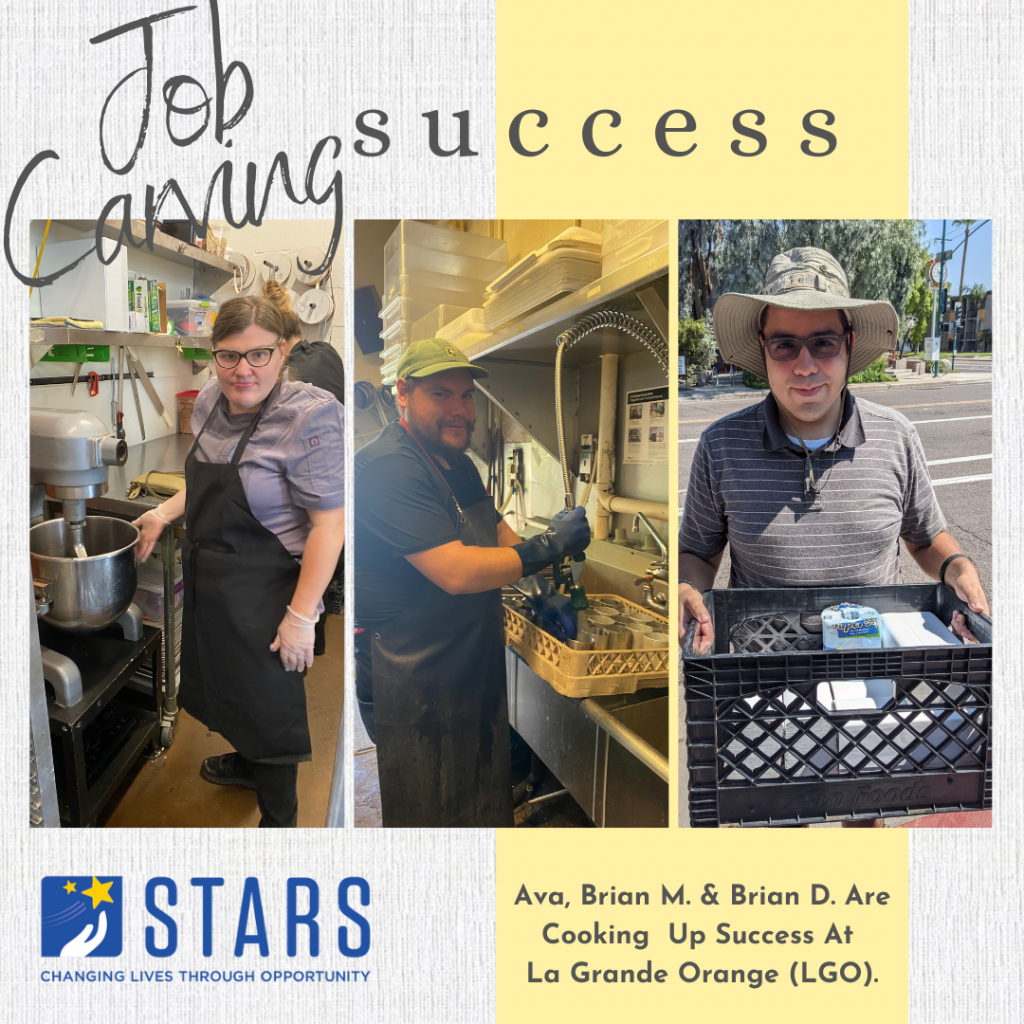 LGO’s Blair Andersen (Regional Restaurant Manager) and Josh Thompson (Bakery Manager) created a very supportive atmosphere for our three participants to thrive.  Blair has worked with Brian D. in the restaurant and Josh has worked with Ava and Brian M. in the bakery. These participants have blossomed because of the atmosphere at LGO.  Brian M. who started in March 2021 as a dishwasher branched over into bakery work. Ava who started in April 2021 continues to build her skills and passion for baking, which is her dream job.

Blair and Josh have taken the time to get to know each one of the participants and is working with the STARS Job Placement Coaches (JPC’s) to gather insight on the best ways to create a successful environment.

They treat the participants with respect, dignity and professionalism and it really shows that they go above and beyond to help accommodate them into the day to day. Because of the genuine and caring support, all three participants state that they love their job and have become a reliable part of the team.

Cheers To 1 Year At Canteen!

Canteen’s Seana Walters (HR Manager) and KC McClane (Warehouse Supervisor) have been great resources for our participants Erik G. and Michael F.  Especially Seana’s open door policy where Erik and Mike can go to her whenever they have a question or concern.

Erik G. | 2/3/21 – Present – Over the past year Erik has struggled with wanting to throw in the towel and quite his current role.  Canteen coached him through those difficult times to help him continue to thrive.  So much so that he was awarded employee of the month!

Michael F. | 3/10/21 – Present -Michael has struggled too with wanting to throw in the towel and quite his current role but he has made a personal commitment to continue to work with Seana and KC and make a go of it. KC is helping Michael find his niche at Canteen so he can become as successful of an employee as he can. 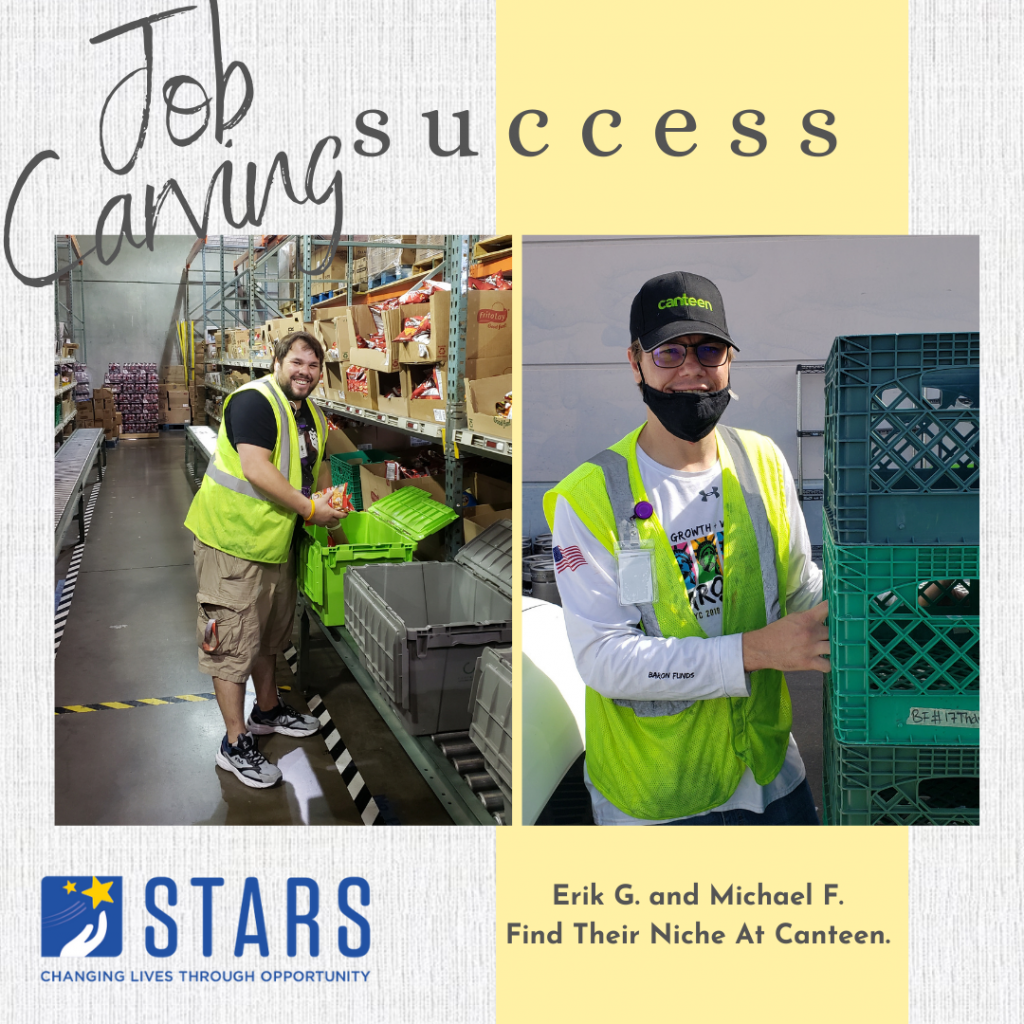 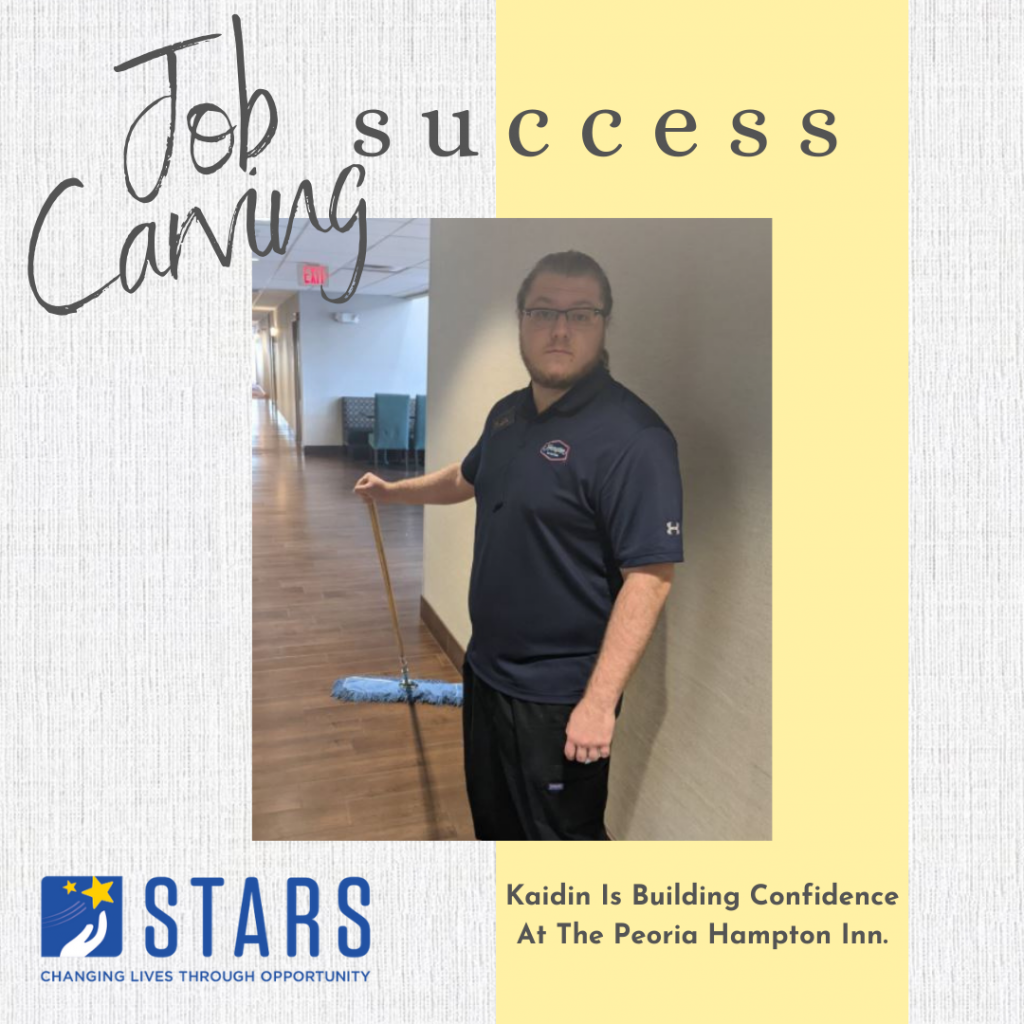 STARS has found a great partner in the Peoria Hampton Inn, who created a unique staff position for Kaidin.  Kaidin went through the STARS Employment First Initiative and let his Job Placement Coordinator (JPC) know that he was most interested in pursuing something in the janitorial field.  His other goal was to become more confident in communicating with people.  He worked hard over the course of three months to prepare himself to apply for a janitorial position and communicate with confidence in an interview.

It takes great leadership and business sense to engage and employ individuals with developmental disabilities. The team at the Peoria Hampton Inn was inviting and supportive and they saw great potential and dedication in an individual who was very eager to engage with them.

They produced innovative tasks and ways to ensure Kaidin’s success in his new position.

Kaidin has become a loyal and valuable team member at the Peoria Hampton Inn and is communicating with staff and customers.  Being part of the team has boosted Kaidin’s confidence, which is noticeable at work and in his daily life.